Every year, sea ice cover in the Arctic Ocean shrinks to a low point in mid-September. This year it measures just 1.44 million square miles (3.74 million square kilometers) – the second-lowest value in the 42 years since satellites began taking measurements. The ice today covers only 50% of the area it covered 40 years ago in late summer.
The Intergovernmental Panel on Climate Change (IPCC) has shown that carbon dioxide levels in the atmosphere are higher than at any time in human history. The last time that atmospheric CO2 concentrations reached today’s level – about 412 parts per million – was 3 million years ago, during the Pliocene Epoch.
The authors of the article see evolving conditions in the Arctic as an indicator of how climate change could transform the planet. If global greenhouse gas emissions continue to rise, they could return the Earth to Pliocene conditions, with higher sea levels, shifted weather patterns and altered conditions in both the natural world and human societies.
The article is very interesting and explains how rock weathering reduced CO2 emissions from 4000 ppm at the end of the age of dinosaurs some 65 million years ago to 400 ppm in the Pliocene (2.3 to 5.9 million years before present), with millions of years for ecosystems to adapt.
It has taken humans only 200 years to completely reverse the trajectory begun 50 million years ago and return the planet to CO2 levels not experienced for millions of years.  Most of that shift has happened since World War II. Yearly increases of 2-3 parts per million now are common. And in response, the Earth is warming at a fast pace. Since roughly 1880 the planet has warmed by 1 degree Celsius (2 degrees Fahrenheit) – many times faster than any warming episode in the past 65 million years of Earth’s history.
In the Arctic, losses of reflective snow and ice cover have amplified this warming to +5 C (9 F). As a result, scientists project that the Arctic will be completely ice-free in summer within the next two decades.
Scientists have also recorded extreme summer melt rates across the Greenland Ice Sheet. In early August, Canada’s last remaining ice shelf, in the territory of Nunavut, collapsed into the sea. Parts of Arctic Siberia and Svalbard, a group of Norwegian islands in the Arctic Ocean, reached record-shattering high temperatures this summer.
Coastal cities, agricultural breadbasket regions and water supplies for many communities all will be radically different if this planet returns to a Pliocene CO2 world. This future is not inevitable-but avoiding it will require big steps to avoid the predicted future. 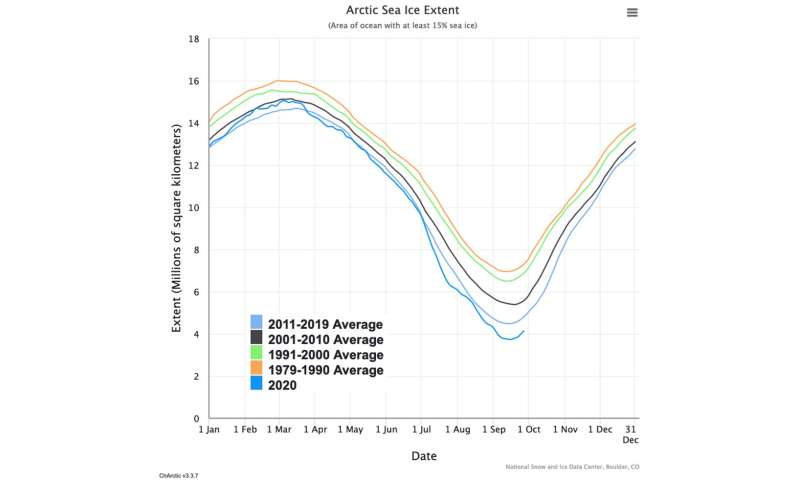